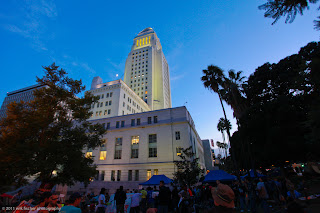 UPDATE WEDNESDAY NOVEMBER 30, 2011: Police raided Occupy L.A. just after midnight this morning.  Many people had been saying for days prior that the eviction was scheduled to allow Sean Penn and Ryan Gosling to shoot a movie on the City Hall site.   There has been credible evidence for days to think this is likely.

The raid was horrifying, but the police were mainly non-violent.   People were given ample opportunity to leave and not be arrested.  People are reporting that many protesters were chased down and arrested as they attempted to leave the perimeter area.  There are also reports that some such people were beaten.

“Hey you kids, get offa my lawn,” said the Mayor, “or I’m gonna call the cops.”   Actually, Los Angeles Mayor Villaraigosa and Police Chief Beck have said they will send social workers and trucks to help people move from the Occupy LA encampment in City Hall Park.  Some protesters are resigned to moving, while others plan to stay until forcibly removed.

Legality:   Protesters could legally sleep on the sidewalk from 10 pm to 6 am, and then protest on the sidewalk all day.  It is questionable whether they could keep tents up all day on the sidewalk.  There is a court case about this for the Skid Row District, but I am not sure it applies to the whole City.  Moving to the sidewalk would be less comfortable, but then, getting wound up with zip-ties and bussed off to jail is not comfortable, either.

If the Occupiers stay, the likely possible legal repercussions are:  being cited or arrested for illegal camping, a City Municipal Code violation;  being cited or arrested for trespass;  being ordered to disperse as an unlawful assembly, with either City or State violations for that. If the City issues its own citations, the City then retains more control over the outcome, and thus, more bargaining power with the group and increased future rapport.  If the the Occupiers are arrested on State criminal violations, that shows the City is throwing its hat out of the ring and loses all bargaining power.

Quite simply, many of the Occupiers are homeless and have nowhere suitable to go.  Forcing them out only highlights this fact and should be a moment of shame for the City.

Whatever happens to Occupy LA in these coming days, there have been Lessons that could be learned from Occupy LA.  The whole Occupy movement has made me think and this is what I’ve come up with:

1) Community Living.  People like living in community, especially single people.  Many people do not mind Spartan living conditions if it means they can share in the energy and life of others.  Sharing meals and sharing chores feels good when with people who share values and goals. Community living buildings were once popular, when the U.S. cities proliferated with residences for young men, working women, and people in the arts.  I think community living buildings are the wave of the future.  It is cheaper to share a kitchen and a bath and main rooms and more fulfilling to live in relation to others.

2) Mental Health.  The lack of adequate mental health care and facilities in the U.S. has come home to roost.  The mentally ill need places they can stay all day, all their lives,  and get the treatment they need, without being put through any hoops to get it.  Los Angeles has tens of thousands of mentally ill people roaming around, hanging out in libraries, sleeping on sidewalks, pushing shopping carts full of bottles.

3) Military vs. Living.   The U.S. need to shift expenditures from military to education, housing, nutrition, and healthcare.  We have become a nation supporting and engaging in  non-stop killing and violence in other nations, rather than a nation providing the human basics needed at home.  Wealthy companies that get military contracts are the only ones benefiting.  And of course, there is the immorality of raping, pillaging, maiming, and killing our fellow human beings.

4) Small Businesses.   The U.S. needs to entirely get out of forcing red tape, paperwork, and hassles onto small businesses.  "Jobs" is an antiquated and fantasy notion, where an outside force provides you with pay and work that you hope will match with your skills and interest.  People today need to develop and market their own skills.  The government makes this almost impossible for people to legally do.

5) Health Care.  We NEED to have national healthcare that has nothing whatsoever to do with “insurance.”  Insurance is a form of gambling that says some people will not seek health care, thus paying for others.  What we need is clinics and doctors where everyone can go and get basic health care.

6) Workers and Jobs.   The U.S. needs to start protecting jobs for U.S. workers.  HB-1 Visas should end.  Allowing businesses to send jobs overseas should end.  Allowing a whole system of underpaid and unpaid labor should end – from workers in the country illegally, to restaurant wait staff being legally paid far less than minimum wage, to students and graduates “interning” for no money, all the way to Arianna Huffington selling the Huffington Post for $315 million and refusing to pay the writers.  Where is the decency or fairness in any of this?

7) Government.    The whole U.S. system has gotten too complicated.  Everything is a giant hassle of laws and rules and paperwork.  No one knows what is going on.  Privacy has been invaded from all angles.  Most people no longer have the basics of what they need, so the system is not really working.  If a government is costing billions and billions of dollars per day and yet is providing almost nothing of value to the average user, it is time for an overhaul.

You have rights if ICE is at your door.